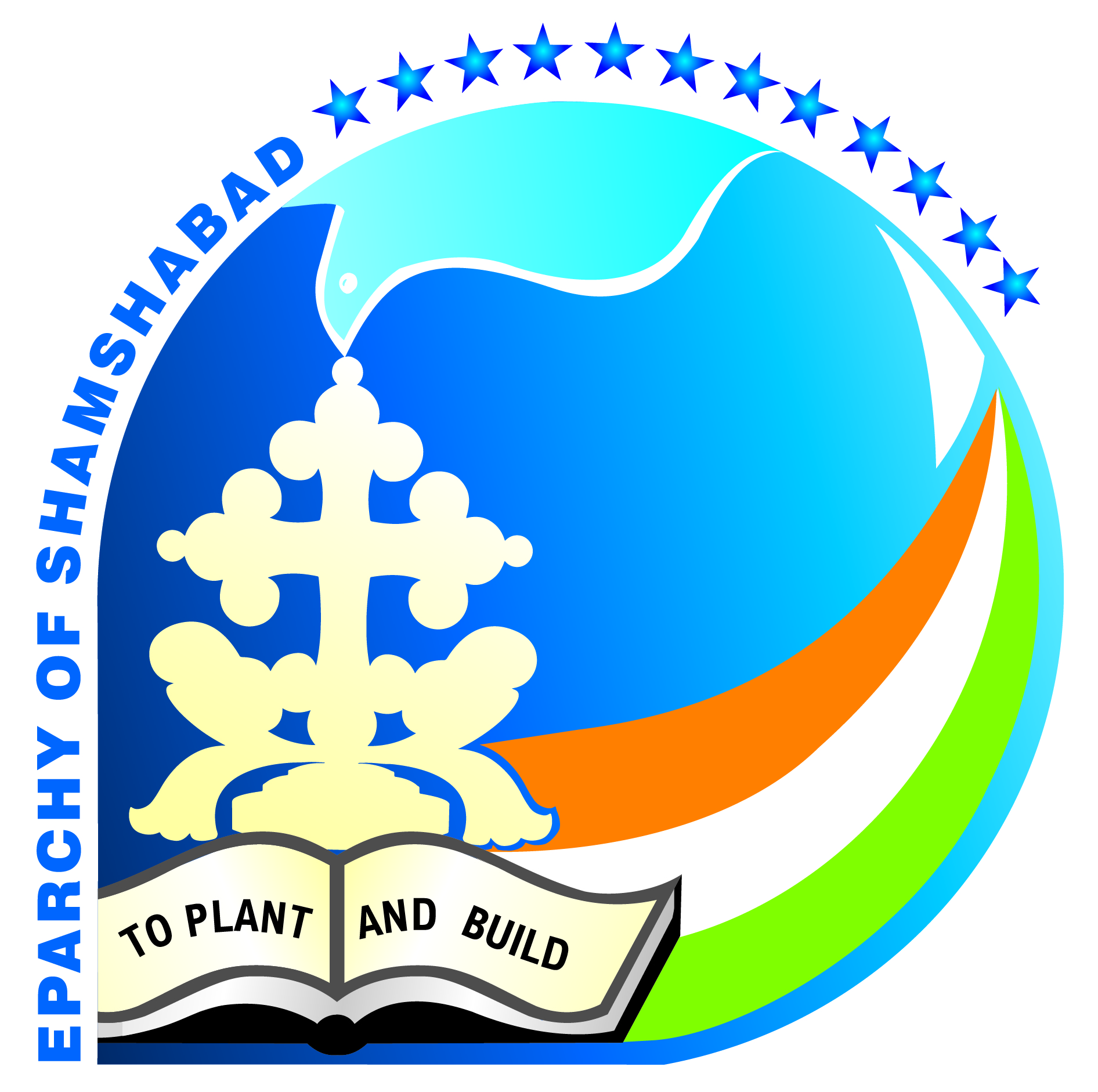 The Holy Bible and St. Thomas Cross (Mar Thoma Sleeva) placed at the southern corner of the emblem signify the Arrival as well as the Apostolate of St Thomas the Apostle (Mar Thoma Sleeha) in Kerala, the southern part of India from where originates the Syro-Malabar Church. The white colour of the Cross and the Bible signifies the light of Christ disseminating through the Eparchy of Shamshabad through the proclamation of the Word and living the identity and individuality of the Church under the patrimony of Mar Thoma Sleeha.

The tricolour, the colours of the National Flag, represents the ‘All India Jurisdiction’ granted by Pope Francis by the geographical expanse of the Eparchy of Shamshabad covering the ‘Rest of India’ spreading in 23 States, 4 Union Territories. The rainbow shape represents the literal meaning of Shamshabad as ‘sunshine’. The spearhead reminds one of the martyrdom of Apostle Thomas and “the Margam” (the Way) to reach out to the four corners of India. The Holy Spirit hovers over the Sleeva as well as the Eparchy and the universe. This overarching presence of the Holy Spirit is the gift of the “New Pentecost” which the Eparchy is challenged to share with one and all in her mission of the Evangelization of India. At the mandate of the risen Lord, the apostles went forth under the Pentecost experience, preaching, teaching, healing, serving and leading the communities to worship and charity (Mt 10:16-20; Jn 14:16, 17, 26; 15:26; 16:7-11; Acts 2:1-8).

The 12 stars signify the intercession and protection of Blessed Mother and the 12 Apostles. Revelation 12:1- 5 describes the Woman of the Apocalypse who upon her head wears a crown of twelve stars. In Catholic tradition she has been identified with the Blessed Virgin Mary. The 12 Apostles of Jesus were “sent” into the world for a definite purpose, with explicit instructions from the Lord (Jn 15:16 ; 17:18; Mt 10:1-7). The new Eparchy continues the mission of Christ as entrusted to and carried by the Apostles (Eph: 2:21). The mission command is also reminiscent here (Mt 28:18-20, Mk 16:15-16). The stars forming the semicircle represent unity, solidarity and harmony of the people of God with its various vocations and charisms.

The name of the Diocese written in the shape of the Pastoral Staff (crozier) stands for the pastoral responsibilities of the Diocese which includes teaching, sanctifying, and governing. The apostles were given this responsibility by Jesus Himself (Mt 16:13-19; 18:18; Jn 20:22-23).

The Blue colour stands for the sky, the sea, the “New Heaven” and the “New Earth” (Revelation 21:1). This is the goal and vision of the Eparchy. This new horizons is the fruit of Christian Liberation. Apart from the most fundamental duties of evangelization and pastoral care, the new diocese expresses its determination to live for the liberation of the poorest of the poor and the marginalized.

The Motto of the Diocese, “to plant and build” taken from Jeremiah 1:10, speaks of the double dimensions of the Mission of the new Diocese. “To plant” indicates sowing the seeds of the Word of God (Evangelization ad Gentes) and “to build” indicates the pastoral concern for the sake of the Migrants of the Syro-Malabar Church scattered in different regions of the Diocese. The pastoral commitment towards the Migrants is aimed at forming them believers in exile as missionaries in India. Enriched in faith and expressed in charity and mercy, they will sing the resurrection experience slogan of Apostle Thomas, “My Lord and My God” until we reach the finality of the heavenly Jerusalem in the beatific vision of the Triune God.